Writing in the Wall Street Journal recently about what lessons we might learn from the great pandemics of the past, the historian Amanda Foreman concluded:

History shows that public leadership is the most powerful weapon in keeping them from becoming full-blown tragedies.

Leadership has been a prominent theme in media coverage of Covid-19. Journalists focus day in and day out on the performance of presidents and prime ministers, and there’s a whole subgenre of commentary on which countries have the best and worst leaders. Opinions on that point differ, but one quite widely-held view (one which could not have been expressed during the Black Death, or even the 1918 flu pandemic) is summed up in this meme, which I saw numerous times last week: 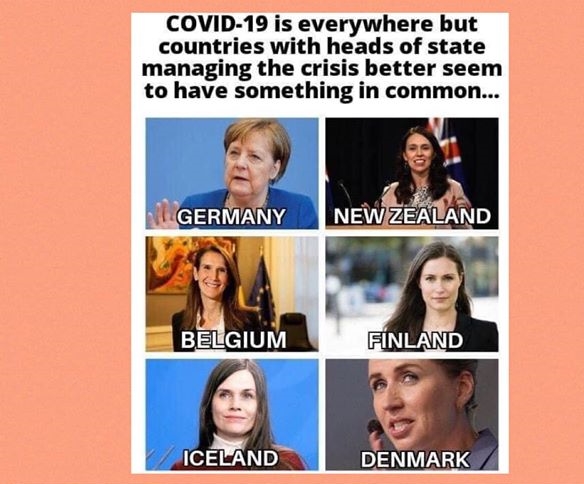 The point was taken up enthusiastically in an article for the business magazine Forbes:

Looking for examples of true leadership in a crisis? From… 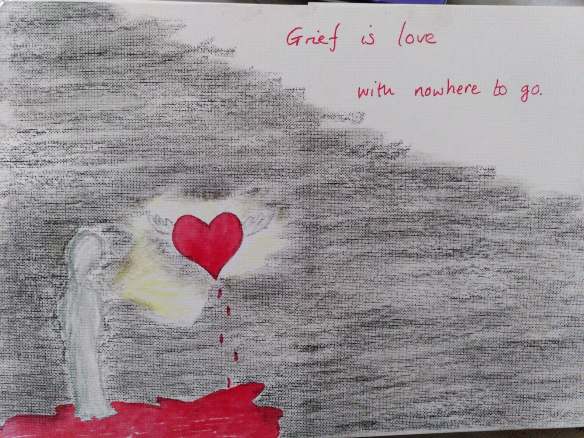 “Grief is love with nowhere to go”

[Notes: The text below is copied from my previous post of 3rd February 2016 with the added quote, because I finally did the (admittedly not great) illustration to go with it. This is, naturally, inspired by current social distancing and isolation measures, and the heartbreaking knowledge that many people are staring into the abyss of grief right now.]

Lately I’ve been thinking about loss. An anniversary of someone gone too soon has passed, and I’ve borne witness to friends experiencing devastating loss. I wish I could ease their pain, but really all I can do is recognise it and hurt with them.

I was thinking particularly of someone who lost a beloved parent, truly their best friend. There is a gap, a hole, a deep darkness in that person’s life now. In the immediate aftermath, when the grief is raw and palpable, I visualise the griever staring into the dark abyss. They shine all of their love into the darkness where once their love was mirrored and multiplied; in life it shone upon their face and glowed within their heart and soul. Now the dark hole of longing, missing and hurting sucks up the light and love that they faithfully shine into it.

All we can do is shine our love onto them from every other angle that we can; but don’t expect it to reflect back at a time like this. Hope simply that it warms their back or glances upon their cheek, and that it touches them just enough. Enough to keep them going through the dark times – until they find their own way to cope with the aching darkness and eventually redirect the light of their love to find a way forward and a way to remember and honour the one who once reflected and amplified their love so beautifully.

“Grief, I’ve learned, is really just love. It’s all the love you want to give, but cannot. All that unspent love gathers up in the corners of your eyes, the lump in your throat, and in that hollow part of your chest. Grief is just love with no place to go.”

Allison Bailey, one of the founders of the LGB Alliance, whom I used to know through an ex-boyfriend, has asked me why I have criticised the group on Twitter, and in particular why I have openly criticised (like many other intersectional feminists) their recent full page ads in the Scotsman (and the Metro) promoting a protest outside the Scottish Parliament on Saturday. 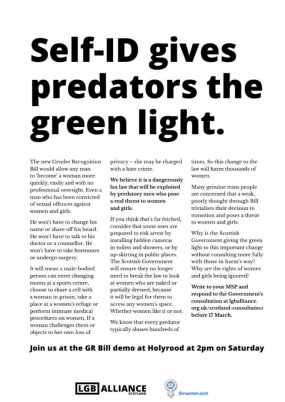 She asked for a public debate but then wrote this:

First questions: “what was in the recent LGBA full page ads that was (i) hateful (ii) factually inaccurate (ii) transphobic? Real world answers please, not liberal feminist gender theory or be kind. posturing”

I last ran Glenmore 24 in 2017 when I covered about 66.5 miles meaning I slightly surpassed my 100k goal. My heart wasn’t truly in it though, earlier that year my best friend and faithful training companion – Brin (the best dog ever) died suddenly and unexpectedly.  I was devastated. Usually, after Glenmore I would stay a few more nights and walk Brin down to paddle in Loch Morlich to ease my sore muscles but without her I didn’t even want to look at the beautiful loch.

I can’t really begin to explain the depth of grief I felt for a wee dog, I went to very dark places – even beginning to plan my own death; if she wasn’t here with me then I might as well not be here either. I don’t believe in an afterlife or anything, there was no fantasy of being reunited.

People might (will) think I am mad, and in a clinical sense that was (is) probably true. I read that it can take four years to deal with the grief of losing a friend. Well, Brin may have been an entirely different species but she was most certainly my friend, a very beloved one at that. Training without her sucked. Being without her hurt. Still hurts.

After Glenmore in 2017 I more or less quit running, at one point I decided I should make it a conscious break and I took up mountain biking, which was a different way to be out on the trails, something Tom and I could do together and another way to try to combat the mental health demons. I also had two new rescue dogs to keep me in check – who rescued whom? You can probably guess.

In 2018, I had a spot at Glenmore 24 again but I still couldn’t face running, so I marshalled and took the younger of my ‘new to me’ rescue dogs with me. I did so much marshalling while not running, and continued to RD Jedburgh with Noanie. It was good for me to stay in touch with the lovely friends I’ve made through ultras, but I still didn’t want to actually run. A year off turned into almost two, but at some point I put my hand up for a free place at Glenmore – a nice benefit of marshalling at the BaM races. I had every intention of training, there was plenty of time…

Anyway, race day came round and I’d done a bit of cycling and run an accidental 10 miler and a couple of intentional 5 mile runs. It would be pretty stupid to run the race.

So I ran the race. Some of it anyway.

Oh yeah, and after two years of only marshalling (not helped by a week of car troubles distracting me in the lead up to the race) I totally forgot what to do as a runner – thank goodness for all the marshalling brownie points I’ve accrued, I was lucky not to get a swift boot up the arse at registration!

I had done soooo much marshalling, I finally did want a shot of being on the other side again and Glenmore is a friendly, safe environment in a beautiful place, with great people… So what if it hurt, there’s nothing wrong with feeling something, even if it’s sore.

This would be an acid test, I convinced myself that this was how I would find out if I still wanted to run.

It was fucking brilliant. I love all the people, and their kids and their dogs, with all their encouraging words, disco tents, unicorn heads, wedges of watermelon, hugs and tears, and I even love the Grim Reaper who met me in the forest in the dark – I gave him a huge hug and told him “Death, I prayed for you to come and here you are!” I know we’ve been talking suicide and stuff – allow me the gallows humour!!

I stopped at eight laps, which is 32 miles. – content that I’d made it to proper ultra distance, sore but not broken, still running at bits, and now just rather happy to get under the covers with my hot water bottle and my fabulous crew, a double act of my friend Emily and Isla her dog (yes, it was really, really cold and it’s definitely crew duty to spoon you if need be, honest!) 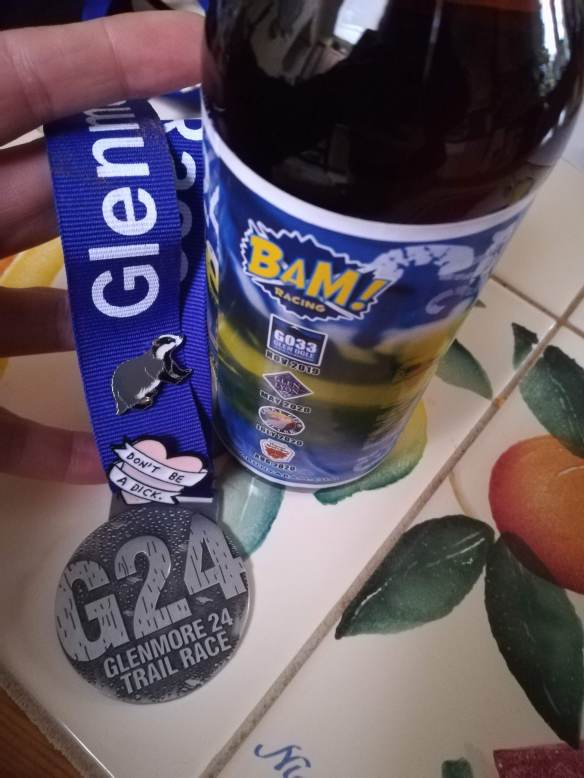 This year’s medal and cider, and the badger and ‘don’t be a dick’ pins from my friends Noanie and Mel, who are both rather good at reminding me that they give a shit.

It’s less than half what I did last time, but in some ways it was probably the bigger achievement, because there was a time not so long ago when I would rather not have been here at all. I know a couple of the other runners have been struggling with their mental health and also had a watershed run/walk/experience at Glenmore this year. I was so glad to hear that they too are ‘back’!

I was interviewed for International Women’s Day 2017…

I love this report on a race I co-direct. It has some swear words and plenty of humour – it has plenty in common with our race briefings then! 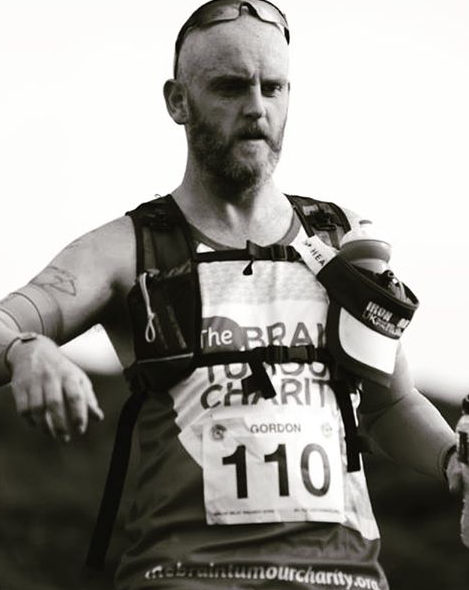 Either way I look at it I honestly can’t bloody believe it. It’s not the fact I ran an ultra, it’s more the fact I actually seen something through!

2 years ago this would have never ever EVER have been an idea I would have entertained. How the fuck I came up with this idea in my head is beyond me.

I smoked (more of a part-time smoker these days if I’m honest). Dabbled with excitable enthusiasm with the devil drink. I was unfit with no intention of being fit. Something happened. Hand on heart I’ve come up with umpteen answers but can’t…

Running had been ticking over comfortably for the second half of the summer but as we entered October my mojo for long runs at the weekend deserted me. This was compounded by Real Life catching me out and requiring me to alter my priorities and completely fail to manage my time effectively. I resigned myself to enjoying a lengthy taper (rather than calling it sheer laziness) and told myself I had plenty of miles in the legs already this year and that, combined with some common sense and experience should see me through the 38 flat-ish miles.

‎Thanks to Patricia Carvalho for the photo.

My sister lives in Gala and she seemed more than happy to put me up for the night and taxi me too and from the start. She works out at the Bowhill estate where they were hosting ghost walks in the estate for Halloween. This was…

Annette makes our medals for Jedburgh Three Peaks Ultramarathon and Relay medals – they are brilliant!

So, in case you don’t already know, I, well technically we(!), have a little craft business on the side (one that is designed to be profitable rather than just a ‘hobby business’ as they say). We have the rather unusual business of making bespoke and different-to-the-usual medals and trophies.

We have made anything between 3 and 500! Get in touch if you are interested in what we can do for you!

I want to go through each thing I’ve done individually, but here’s my favourites so far: 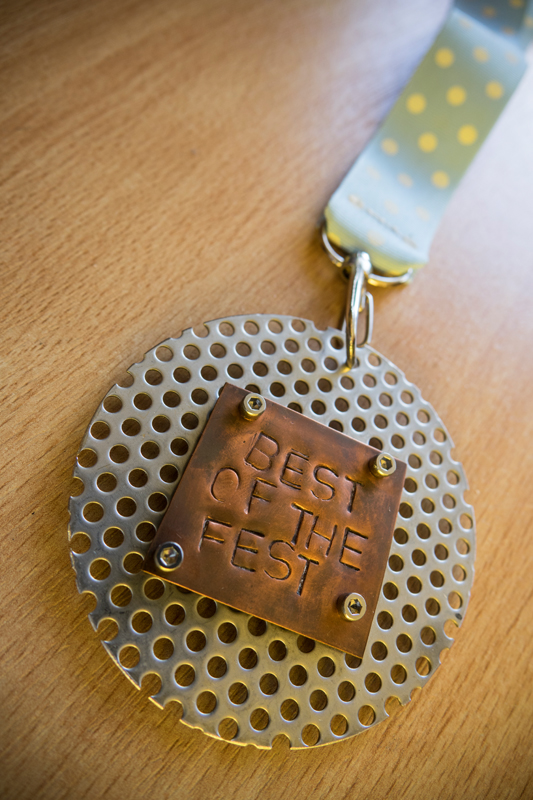 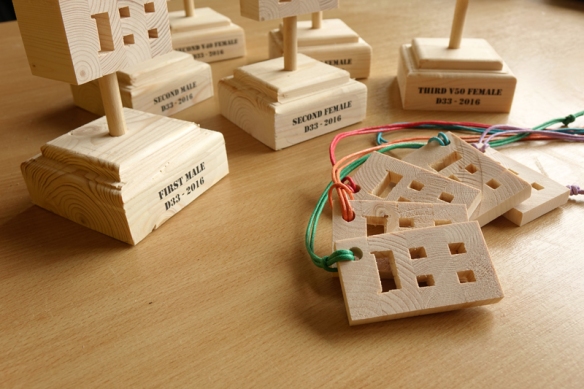 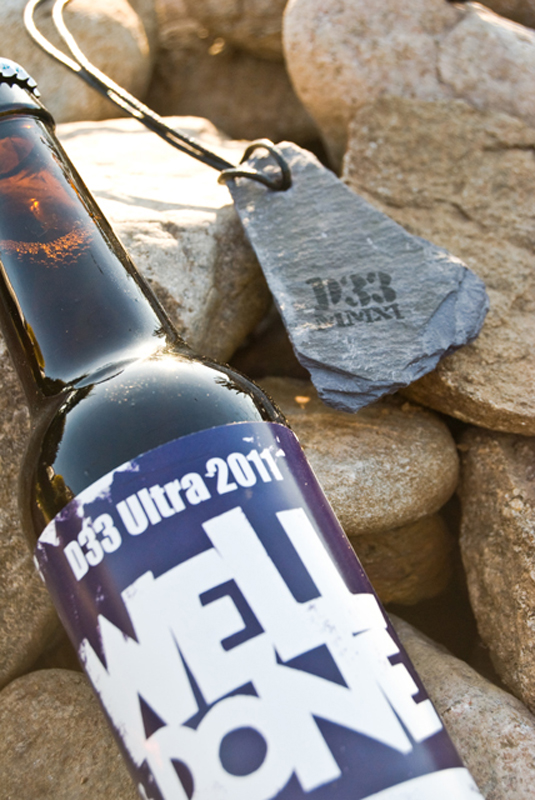 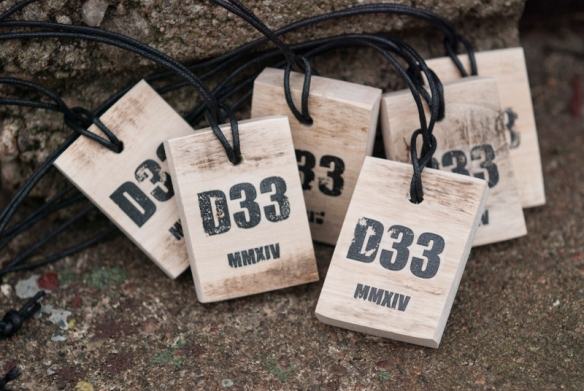 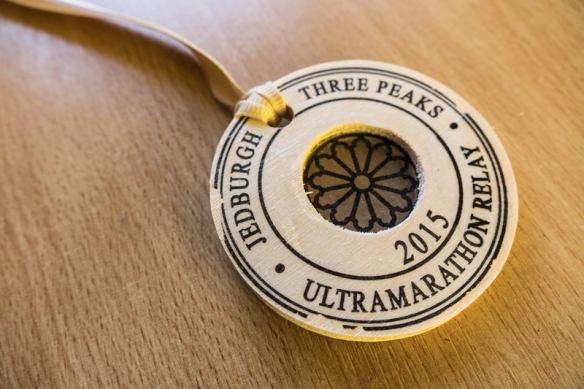 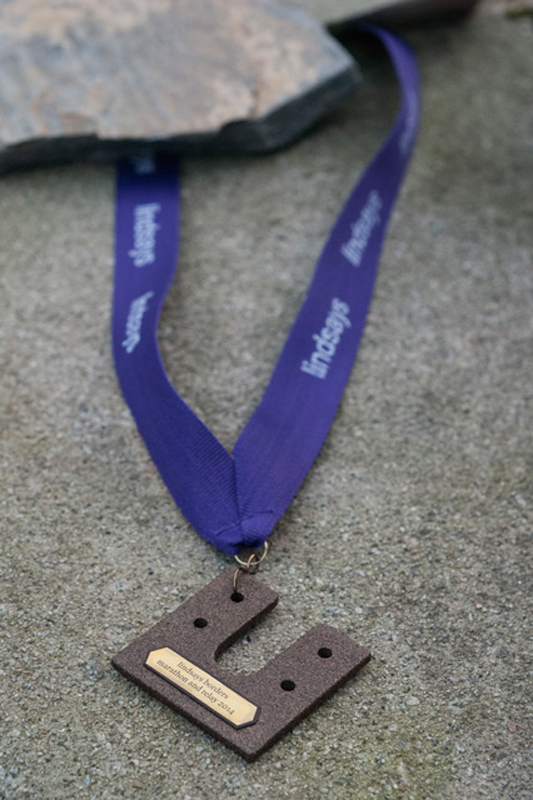 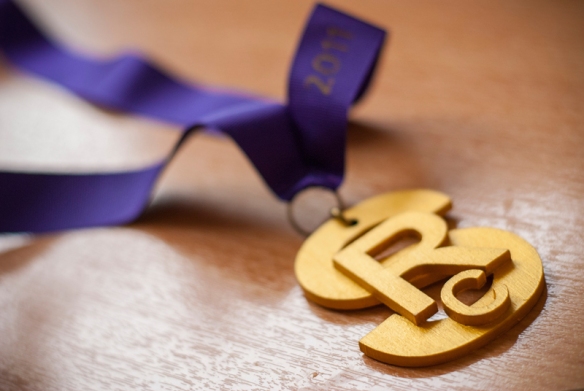 What do you think? Would you be happy to receive one of these?

Well,  I got out for a wee run tonight. I huffed and puffed my way round five kilometres. Yet again, I am back at square one. I’m restarting training for the third time this year as I’ve twice been scuppered by a badly sprained ankle. I’ve also been pretty snowed under with work. In other news, I’ve recently just shorn my very long hair. The hair will be donated for wigs and the shaved head attracted a lot of offers of charitable donations (when I simply mentioned I was planning to do it) so I decided to ask anyone who wished to donate to put it towards my friend George’s fundraising for Breast Cancer Now. If you wish, you can donate here.

A few photos of ankles and hair to hairlessness follow by way of summing up the last three months or so (we won’t go into work stuff): 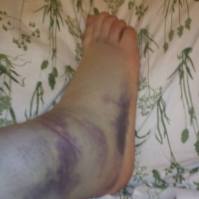 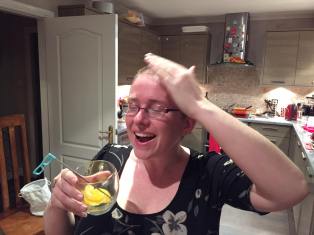 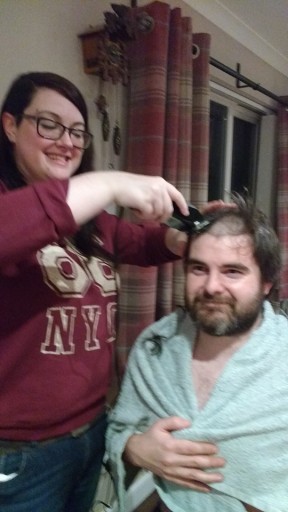 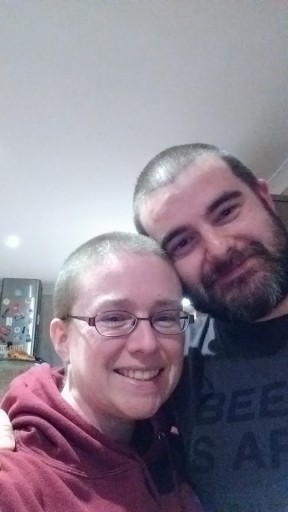 Hers and his baldy bonces!